A politician was canvassing the county in a race for a seat in the North Carolina State Legislature.  He dealt in generalities and was careful as far as 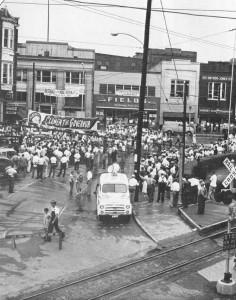 possible not to commit himself on any proposition.  One of his constituents was a farmer whose sheep had been killed by dogs, and consequently he was much interested in the passage of a dog law then under discussion.  The old politician knew how dangerous to his kind dog laws were, and had never mentioned the subject once.  Finally the farmer in question began to follow him around, and ask him in a loud voice during his speeches: “How do you stand on the dog law?”

At last the candidate, being forced against his will to make a declaration, said: “Yes, I am in favor of a dog law.”

“What kind of dog law?” called out his tormentor.  “That’s what we want to know.”

“Well, I’ll tell you,” said the orator, and then hesitated.

“Go on,” yelled the farmer, “and tell us what kind of a dog law you are for.”

“Wait a minute,” said the candidate, “and I will tell you.  I am in favor of a good law that will protect the sheep and at the same time will not hurt the dogs.”