As Halloween Approaches It Conjures Those Evil Spirits! 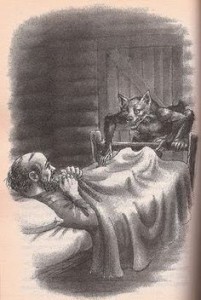 Conjuration is effective not only in the material but also in the spirit world.  The devil is a master of the black art and there are charms for summoning him as well as for seeing and talking with ghosts.  But the conjuring of spirits takes the form chiefly of charms to ward off or avoid eveil spirits and to keep them from interfering with human affairs.  This fact has special interest in view of the absence of benevolent fairies among these supernatural creatures in America.  In one tale (which seems more European than American) the poor, hard worked old mother of a big, no-‘count brat has a dream in which “tiltin on the bed-foot some little folk whinnied with each other and she heard them making talk ‘bout that no-‘count whelp she had: and by “taking their yarnin for truth – she was that near wooden they say” she managed to cure her son of laziness by means of a magical horseshoe.  With hammer for toe and a thousand pins in each calk, it was sewed on his back while he was asleep, and every time “he went to set down or thought on doin aught else but toil that hammer beat him and them pins pricked him till he thought not on idle fare more.”  But such beliefs in “wee folk” are only “idle fare” and, far from being active, are rare even as survivals in Southern folk tales.  Ghosts and the devil are very much alive, however, and witches only a little less so, for, though charges of witchcraft are heard occasionally, most of the bewitching takes the form of conjuring, and the old broom-riding variety of hag lives only in “the old ones’ yarns” and in tales to scare children.

As in all counter charms, evil smells are effective in driving away spirits but mustard seed planted under the doorstep, or fern seed in the hollow, a sprinkling of salt, pepper, sulphur, or collard seed, a Bible or a sharp object under the pillow will keep away both “hants” and witches, who can be killed only with silver (sometimes brass) bullet.  Used against witches, a broom or hair brush across the door or a Bible or sifter under pillow are effective because the witch has to stop to count whatever come before her.  And sharp things (forks, knives, scissors, needles, around the bed, or under the pillow) catch in her skin, which she has to shed before she can ride you, and keep her from getting back into it when she is through.

With the devil, who when not attired as a silk hated gentleman with an “ambrosial curl” to hide his horn, assumes the forms of black cat, rabbit, terrapin, serpent, house fly, grasshopper, toad, bat yellow dock, black billy goat, with witches, who take the form of old women, black cats, ghouls, vampires and nightmares, and ride people till they can’t sleep and horses till they are all tired out, leaving them with tangled hair or knotted manes; with ghosts of the wicked, who take the form of headless black men, black cats, dogs, hogs or cows and good spirits who appear as white doves, men, and children or look like mist or clouds, we enter the world of demons and bestial shapes.  These include not only diabolic and spectral transformations but animals with uncanny powers.  This is the realm of erroneous nature beliefs, akin to the “unnatural natural history” that preceded the science of zoology.  Here the aleatory element is submerged by fantasy; superstition gives way to mythology.