Local Version of the Tortoise and the Hare

The Terrapin and the Deer

Once, in the olden times, when the animals of the earth had the power of speech, a red deer and a terrapin met on Joanna Bald.  The deer ridiculed the 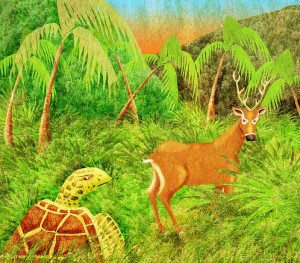 terrapin, boasted of his own fleetness, and proposed that the two should run a race.  The creeping animal assented to the proposition.  The race was to extend from the Joanna Bald to the summit of the third pinnacle extending to the eastward.  The day was then fixed and the animals separated.  During the intervening time the cunning terrapin secured the services of three of its fellows resembling itself in appearance, and having given them particular directions, stationed them upon the several peaks over which the races was to take place.  The appointed day arrived and the deer, as well as the first mentioned terrapin, were faithfully on the ground.  All things being ready, the word was given and away started the deer at break neck speed.  Just as he reached the summit of the first hill he heard the shout of a terrapin, and as he supposed it to be his antagonist, he was greatly perplexed, but continued on his course.  On reaching the top of the second hill, he heard another shout of defiance, and was more astonished than ever, but onward still did he continue.  Just before reaching the summit of the third hill, the deer heard what he supposed to be the same shout, and he gave up the race in despair.  On returning to the starting place, he found his antagonist in a calm and collected mood, and when he demanded an explanation, the terrapin solved the mystery, and then begged the deer to remember that mind could sometimes accomplish what was often beyond the reach of the swiftest legs.