A much sought for dish upon such occasions, as harvest was pot liquor, a product of the times of great abundance.  Pot liquor was not as humble origin as 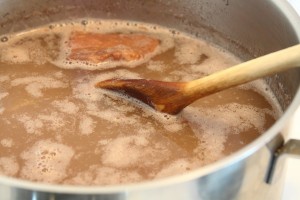 its name implies.  During occasions which demanded big dinners, a whole ham, or possibly two, were placed in a big pot of water and suspended from the chimney crane over the fire.  When the meat was partly cooked, cabbages were added and later peeled potatoes were placed in the pot, and when these vegetables were partly cooked, corn meal dumplings were added and after all were sufficiently cooked together, they were taken out and a handful of corn meal was sprinkled over the pot liquor and allowed to cook a few minutes.  The pot liquor was thus seasoned with juicy, fat ham, scraps of the cabbage, potatoes, and corn meal dumplings and thickened with corn meal.  It needed no other seasoning and was superior in flavor and strength of nourishment to the many soups of the present day cooking.